skip to main | skip to sidebar

Referrals, but not our daughter

I have been hesitating to write here, but I did want to let everyone know that something is going on. It will be three years in June and we are not going to renew again, so if it was meant to be it will happen soon. We received a "call" in January, but it was a boy (we have three boys, so that was a no). We received another call on March 24th for a 12 month old girl. We were very excited, we called the doctor and did the research. Unfortunately, she has potential problems that may not have been overcome with general therapy and extra help. With three other children we thought it would be too much. To say that we are sad and frustrated is an understatement. But, if I was meant to be a mother to a daughter, then it will happen, if not I rejoice in the love of my husband and my three awesome boys! We are already so lucky.
Posted by W. Rose at 9:14 AM 5 comments:

We got "the call" but not really. Lina was reviewing our homestudy and saw that we have a biological child with a heart defect and thought we might consider a child with a medical problem. It was a hard decision, but with three other children it is decision that effects the lives of more than you and your spouse. If we did not have any other children, we may have considered it, she is very cute and the condition is manageable. We live a very active lifestyle and someone with her medical needs would probably not be able to go camping, etc.

We are finished with the homestudy update, Lina suggested we change the age from 0-3 to 0-4. With that change we have to wait a little longer to get DCFS approval again, since it was just approved this week for 0-3. Only in IL do you have to get DCFS approval. Then we will apply to CIS again, more prints etc.
Posted by W. Rose at 8:52 PM 1 comment:

After almost a month and a half of our homestudy agency telling us that they are busy, they finally scheduled our homestudy update meeting. We had the meeting today, everything is the same except for the name of our nanny, so hopefully it will be sent to Lina for review quickly. The update was $900 and the nanny's medical exam and fingerprints were $100. We had to file a request to renew our FBI & state fingerprints, this was $75 each. The USCIS immigration update (I-800a) apparently does not have a fee, but I assume the fingerprints do.
I am so frustrated by the seemingly endless waiting process as everyone else is who is waiting. I wish there was a list and some order to it all. I am very tempting to switch countries, but as much as the wait and the process seems unfair, I am a practical person and the $13,000 we have invested seems like a lot of money to just let it all go and start over. We are just about two years into the whole process now, waiting for 11 months now.
Posted by W. Rose at 6:58 PM 2 comments:

Time to renew our Homestudy

I have been hesitating to post lately, just out of frustration with this whole process. Now I see why so many people stop in the middle of the process. We have been very upset that there seems to be no sense to the "waiting list". Families with the similar requests to ours have a short wait, when we having been waiting more than 10 months now. I wish there was some order to the whole thing, I feel bad having these "it's not fair" feelings. I AM just happy that things are happening for some people, it does give me hope that maybe our turn is coming.

IN the meantime, we have been asked by our adoption agency to start the renewal process on our homestudy 4 months in advance of the immigration paperwork expiring. So that is June, so I am told. I contacted the homestudy agency and of course there is a large fee for the renewal process. The biggest hurdle is telling our new au pair that she has to get a blood test and be finger printed. Good thing David speaks Spanish.
Posted by W. Rose at 7:47 PM 3 comments:

My last post was September 23rd, so I guess we have been waiting about 5 month. Today we finally applied for passports for our 3 boys. It was very difficult to get me, my husband, and all three children to the post office during regular business hours all at the same time! Today is Casmir Pulaski Day and here in Chicago it is a holiday for school (we are teachers), so it was the perfect day to apply for the passports. How ironic that it was thanks to a Polish war hero that we all had the day off!!
We still haven't decided if we will bring the kids with us to Poland, but in 6 weeks, we will at least have the option. My passport will expire in October, so I am mailing mine in later today for renewal. Glad I noticed the expiration date today!
A recent pic of our current family.... for now... 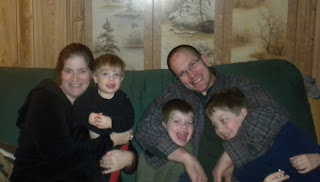 I came across this website and I wondered if anyone has ever been to any of their events. There was a picnic here in IL last weekend. I saw that they have meetings in other states as well.
http://www.adoptionspolish.com/index.html
Posted by W. Rose at 9:18 AM 6 comments:

Not really officially waiting yet...

I e-mailed Lina to confirm that everything was received and to confirm that we were officially waiting. I was surprised to find out that it takes about 2 months for "translation & authentication", then we are placed on the waiting list.
Also, while Lina did send our paperwork to Poland, she requested we do 2 things. Our au pairs' medical form was missing a few boxes that were not filled in and she sent it back to us. And my children's medical forms were the DCFS forms that the doctor's office always uses, but Lina wanted them on the St. Mary's form. I was kind of kicking myself for that one, but the form asked so many adult questions, it just seemed odd to use it for small children. So Both sets of doctors are filling out new forms and then I will have to get them apostilled again and then they will join our other paperwork in Poland.
Posted by W. Rose at 7:14 AM 4 comments:

W. Rose
Chicago, Illinois
I am a National Board Certified Library Media & Technology Specialist in a K-8 Chicago Public School. I have a Ed.D in Instructional Technology. 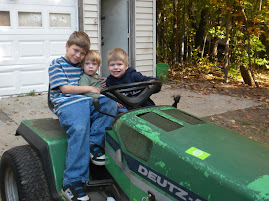